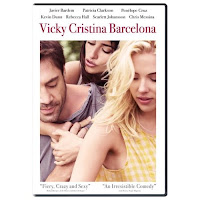 Oscar winner Javier Bardem (No Country for Old Men), Oscar nominee Penelope Cruz (Volver) and Golden Globe nominee Scarlett Johansson (The Nanny Diaries) light up the stunning city of Barcelona in this sexy romantic comedy. Vicky and Cristina are two young Americans spending a summer in Spain, who meet a charming Casanova and his beautiful but volatile ex-wife. When they all become romantically entangled, the smoldering sparks begin to fly in hilarious fashion. Critics rave, Vicky Cristina Barcelona is one of Woody Allen s finest films, with bravura performances from its incredible cast (Jeffrey Lyons, Reel Talk/NBC)

Hmm I was really interested to see this movie because I figured it could turn out to be anything, I really had no idea what it would be like. It surprised me how light the movie sort of was, I mean it was no chick flick romance comedy but it wasn't nearly as heavy as I thought it might be. Woody Allen is all over the place so I had no idea what to expect. I would definitely compare it to Scoop and also a bit to Matchpoint.

One thing that was kind of weird and distracting to me was that the movie had some narration in it. Not like The Royal Tenebaums Alec Baldwin narration but like the Shopgirl Steve Martin narration, it was just distracting. I think it would have been better with a different voice but I had a hard time following along when there was narration.

I liked all the characters and surprisingly to me I kind of liked Penelop Cruz in this movie, she usually just doesn't do it for me, but this time she did. I loved the scenes between her, Scarlett Johansson and Javier Bardem. Those were the best to me.

Anyhow, the movie was interesting. I feel like ranking it. I thought it was better than Scoop but not as good as Matchpoint. So there is that.