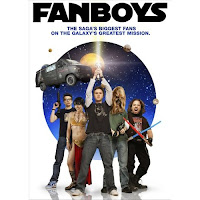 Get ready for the comedy adventure that’s “smart, funny, and tailor-made for the inner-Jedi in all of us” (Pete Hammond, Hollywood.com). In 1998, four childhood buddies with a shared love of all things Star Wars reunite for one final, hilarious odyssey. Their insane plan: a cross-country road trip to storm George Lucas’ Skywalker Ranch and steal a copy of Episode I before it’s released. With the police, a crew of angry Trekkies, and a crazy pimp hot on their trail, what could possibly go wrong? Featuring Dan Fogler (Balls of Fury), Jay Baruchel (Tropic Thunder), and Kristen Bell (Forgetting Sarah Marshall), plus a slew of hysterical surprise cameos, “the Force IS strong with this one!” (Brian Gallagher, MovieWeb).

I basically wanted to see this because everything Kirsten Bell is in usually rocks, I was kind of over Star Wars for the time being and hoped this movie wouldn't annoy me. Thankfully it was hilarious beyond belief! Probably one of my recent favorites. For the most part all 5 of the leads were great, sometimes Dan Fogler got on my nerves but I think that's just him, maybe he will grow on me, maybe not. I loved all the cute nerdy boys in this movie though!

Another great thing this movie had were all the cameos including Seth Rogen playing multiple characters, can you say awesome. I think one of my favorite scenes in the movie involved the 4 guys taking a detour on the way to Skywalker Ranch to go to Iowa and battle it out with some Star Trek nerds.

Sometimes I get bored during "road trip" movies but this one was really successful for me. I really liked the bittersweet part of the movie involving one of the friend's illnesses. In the end, I think it was all the random cameos that really made the movie for me. I would highly suggest this to any Star Wars fan and anyone like me that's enjoyed Star Wars in the past but maybe needed a break. Watch This Movie.