Got up at oh 4:30, met Bethany and Gail in my hotel lobby and we walked down the street to the Javits Center. It was raining which was a bummer but it was only about a 15 minute walk down the street. We got there and there was like no one in sight, eventually we got into the building and were sent on a wild goose chase trying to find the ticket line. At least we got to see part of the building before it was really crowded! Eventually we found the right place and got in line with some other fellow bloggers. It was nice having a bit of time to chat with them!

Afterwards I headed back to the hotel and dried off a bit and did some final planning before heading back. Once I got there I took a seat in the lobby and waited for Sharon to arrive and for Gail and Bethany to finish at their author breakfast. It was funny seeing all the people come in, sit down and take off their sneakers and put on their fancy shoes. There was no way I could have survived in anything but sneakers. Here's what the lobby of the Javits Center looks like, love all the glass! 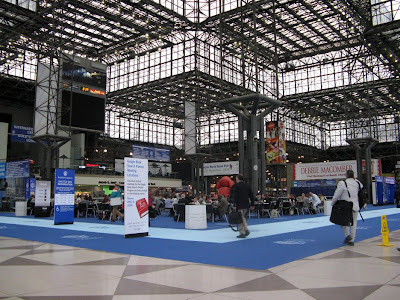 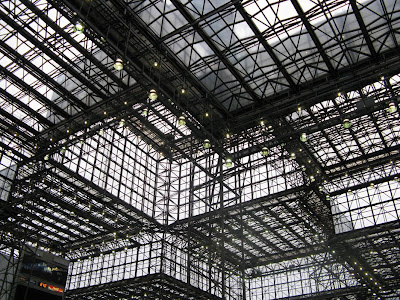 Friday we got to know how BEA was set up, found where everything was and also quickly discovered there was time to do a lot more than we had originally thought! We did a lot on Friday so here are a few highlights and a picture! 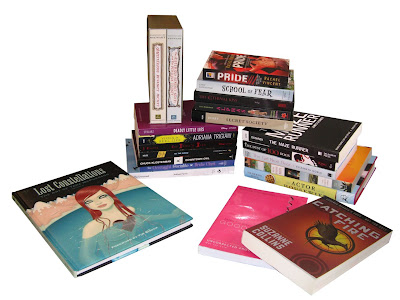 Got Sharon and myself lost looking for the autograph area and ended up at a back loading dock or something! She thought I was going to take her down! :P

Met Janicu at the Blogger Meetup at 9:30 while at the same time losing Sharon and finding her again! LOL! Janicu is so sweet, she got me a signed copy of Rachel Vincent's Pride! Thank you!

Finding an ARC of School of Fear by Gitty Daneshvari which was a recent Waiting on Wednesday pick!

Talking to Sarah MacLean after her time slot in the autograph area.

Meeting Adriana Trigiani! While waiting for the line to open up she came up to us and said "Are You Waiting For Me?!" I almost died, what a sweet lady!!!!!!!

Sitting down on the ground, to eat. The pizza wasn't very good but OMG did I need to sit down right about then and I didn't care where!

Being 1 of 5 people to get a signed copy of Tara McPherson's Lost Constellations. I had no idea how long her line would be so I went early and turns out I was the second person there! She was going to be signing these "signing card" postcard things and then right before she arrived the lady at the booth said the first 5 people would get signed copies of the actual book OMG!

Getting to sit for awhile while waiting in the Catching Fire line, this is what it looked like before the line started moving! That white stuff up there is where the actual line starts! 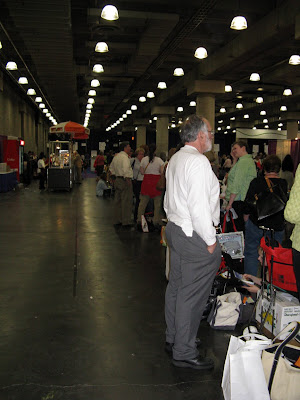 And to end our day at BEA Gail and I got to meet Natalie Standiford who was signing her new book, How to Say Goodbye in Robot. I think her book is one that I am most excited about and it's definitely one of my new favorite covers!

Once I got back to the hotel I changed quickly and headed back out the door to Books of Wonder. Lots going on over there, a bunch of authors hanging out and wouldn't you know it, some of them were there to rock! 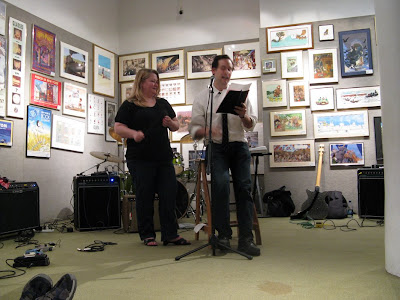 Here's Rachel Cohn and David Levinthan also known as The Infinite Playlist? That's what they call themselves right? And they opened for the band Tiger Beat! 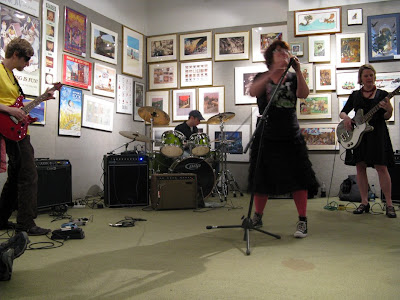 Tiger Beat is made up by authors Libba Bray, Daniel Ehrenhaft, Barnaby Miller, and Natalie Standiford! What an awesome show they put on! Here is a video of one of their songs if you are interested!
After that we went to the hotel so I could sit down some more and stop whining, after having some Subway (I know I know, not what I should be eating- it was across the street!) We headed to one final comic book store, Jim Hanley's Universe. It was within walking distance from our hotel and also right near the Empire State Building. This was definitely my favorite comic book store there. They had a lot of interesting stuff which I just couldn't help but buy! Here's what I got: 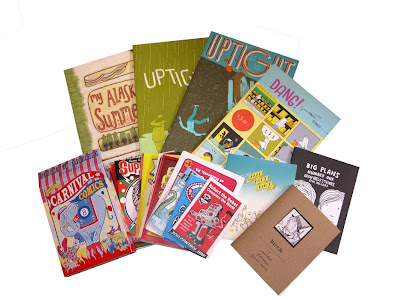 The coolest thing I found there was this little box of comics called Carnival Comics, I'm all about cute stuff and how cute is that! It had all those comics just to the right of it in it. Can't wait to read these.

After that we headed back to the hotel and I crashed! Up next Saturday...
Posted by Alea at 7:00 PM