Dead Until Dark by Charlaine Harris 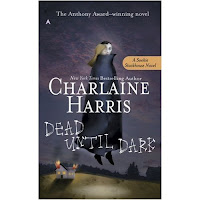 Sookie Stackhouse is a cocktail waitress in small-town Louisiana, but she keeps to herself and doesn't date much because of her "disability" to read minds. When she meets Bill, Sookie can't hear a word he's thinking. He's the type of guy she's waited for all of her life, but he has a disability, too--he's a vampire with a bad reputation. When one of Sookie's coworkers is killed, she fears she's next.

Upfront I will say that before I read Dead Until Dark I had seen Season 1 of True Blood so it was an exercise in compare and contrast for me. And this is one of those rare cases where I liked the show a bit more than the original source material, the book. But no matter, I still enjoyed the book and am excited to continue reading the series and watching the series to see what other kinds of adventures Sookie gets into. I've tried to close my ears to spoilers but a few minor things have gotten through and they sound exciting to me!

While Season 1 of True Blood follows the same basic plot it was interesting to see the few differences, who was present for what and even a few characters that were a bit different or not even present in the book. Since the book is told from Sookie's perspective and the show follows all the characters around you hear everything straight from Sookie in the books. I think that made it a bit harder to get to know all of characters as well as you do on the show, but at the same time makes Sookie more lovable because you are with her the whole time. I love the world that the author has created, vampires living out in the open with humans and whatever else exists in her world!

Overall a great start to a series and introduction to a world. I can't wait to read ahead of True Blood and enjoy the books before the show!

Genre: Fantasy/Mystery
3.5/5 Stars
Purchased by myself
Posted by Alea at 6:00 AM