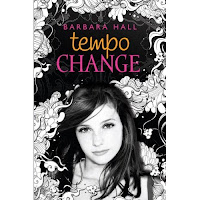 It’s tough enough defining your identity—imagine if your father was a rock legend.

Blanche Kelly's dad is a famous indie rock icon, but not many people at the private school she attends on scholarship know this. Her father left when she was in the first grade, and she can’t quite forgive her mom for not understanding that an artist like her dad needs the time and space to connect to his muse.

When Blanche creates an all-girl rock band, their sound captures a wide audience and the band is invited to compete at the Coachella Music Festival. Blanche feels this could be the perfect time for a reunion with her father. Won’t he be proud to hear her band? Won’t he be happy to get to know his only daughter?

Author Barbara Hall sensitively explores the expectations between parents and teens, as well as the value of learning about your past to make your own future.

I really liked the main character, Blanche's voice. She's spunky, sarcastic and she speaks her mind. She is what she is and she seems fine with it. She has a unique perspective.

One of my favorite things about this book was Blanche's journey to Coachella and meeting her father again. In the form of creating a band called the Fringers from girls she plucked from different parts of her life (her friend, a girl with a wonderful voice in her choir class, and a girl she works with but never really knew). She brings them together and creates what looks a really awesome band. I love the whole scene that they get thrust into and how they bond as a group and become friends and what it helps Blanche learn about herself.

My other favorite thing was Blanche's family. Her and her mother trying to cope with her father leaving when she was six, why did he leave, would he ever come back? And also Blanche trying to get used to a new man in her mother's life, one that also might have some insight to offer her.
I thought Blanche's reunion with her father was an interesting one, I found it rather honest.

About half way through the book there is a strange twist that sort of takes the attention away from Blanche. I'm not really sure how I feel about it. It was interesting but at the same time I think I could have done without it and spent a little bit more time with Blanche just being Blanche. So there's that.

Overall I found this book to be pretty unique and enjoyable!