The Sweetheart of Prosper County by Jill S. Alexander 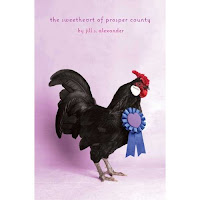 Amazon.com:
Almost-15-year-old Austin Gray is tired of standing at the curb and watching the parade pass her by. Literally. She decides this is the year she’ll ride on the hood of a shiny pickup truck in the annual parade, waving to the crowd and finally showing the town bully that she’s got what it takes to be the Sweetheart of Prosper County.

But far from simply being a beauty contest, becoming Sweetheart involves participation in the Future Farmers of America (FFA), raising an animal, and hunting or fishing. Austin will do almost anything to become Sweetheart, and has the support of her oldest friend, Maribel, her new FFA friends (including the reigning Sweetheart, and a quiet, cute cowboy), an evangelical Elvis impersonator, a mysterious Cajun outcast, and a rooster named Charles Dickens. If only her momma would stop overprotecting her, and start letting Austin live her own life. But Austin can’t move on until Momma moves on, too—and lets the grief of losing Austin’s daddy several years before out into the open.

Here is a bighearted story that will leave readers agreeing with Austin that sometimes, it’s not what you ride, it’s how you roll.

This has got to be one of the darn cutest, wholesome books I've read in awhile. I'm not sure if I've read anything like it! It just worked for me! I really don't have any complaints! It really has all that you could ask for, family, friends, a stupid bully, a touch of romance, eccentric town folks, and a rooster named Charles Dickens! I wish I could have visited this town!

I loved Austin Gray, she loves her momma, misses her daddy and just wants to get through high school without being picked on by bully Dean. She sees all the sweethearts in the parade pay him no mind and she decides that's the way she can finally stick it to Dean. To do so she'll need to join FFA (the Future Farmers of America) and also care for an animal for the purpose of showing him. The animal she picks is a rooster and oh boy does he come to life on the page! I loved Charles Dickens the rooster!

Before Austin decides to go out of FFA she had a friend named Maribel who is very confident in herself and never lets anyone's taunts get her done. While Austin makes some new friends in FFA she never abandons her friendship with Maribel and I just love that. It shows that while maybe your interests change and evolve a bit doesn't mean you have to leave your old friends behind for new ones. The friends she make in FFA are very kind to Austin and show her the ropes a bit and also help her out a bit with Dean! Sundi the past sweetheart is especially memorable.

Another memorable character is a boy that's an Elvis Performance Artist, as he puts it. He adds a great bit of humor and also classic manners to the story. Another character I really liked was Mr. Boudreaux who watches out for Austin and her momma. This story had a great cast of characters.

Overall a great book with a lot of heartwarming moments and also some good fun!

The Sweetheart of Prosper County will be released September 1st.
Genre: Young Adult
4.5/5 Stars
ARC provided by Amazon Vine
Posted by Alea at 6:00 AM