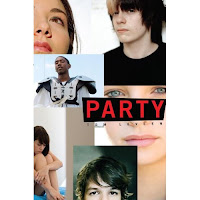 It's saturday night in Santa Barbara and school is done for the year. Everyone is headed to the same party. Or at least it seems that way. The place is packed. The beer is flowing. Simple, right? But for 11 different people the motives are way more complicated. As each character takes a turn and tells his or her story, the eleven individuals intersect, and reconnect, collide, and combine in ways that none of them ever saw coming.
Released April 27 2010

Ummmmm this sounds exactly like what I like. Alternating perspectives between 11 people all at the same party! HELLO! Yes please! The only thing is it sounds a bit (and actually looks a bit) like wtf by Peter Lerangis. But hey I'll read both!
What can't you wait for to be released?
"Waiting On" Wednesday is hosted by Jill at Breaking the Spine!
Posted by Alea at 6:00 AM