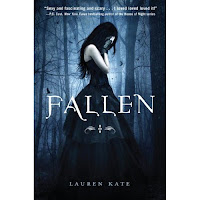 Mysterious and aloof, he captures Luce Price's attention from the moment she sees him on her first day at the Sword & Cross boarding school in sultry Savannah, Georgia. He's the one bright spot in a place where cell phones are forbidden, the other students are all screw-ups, and security cameras watch every move.

Even though Daniel wants nothing to do with Luce--and goes out of his way to make that very clear--she can't let it go. Drawn to him like a moth to a flame, she has to find out what Daniel is so desperate to keep secret . . . even if it kills her.

Dangerously exciting and darkly romantic, Fallen is a page turning thriller and the ultimate love story.

For being so long this book was almost too simple. Don't get me wrong, I enjoyed it, I liked the characters, the atmosphere and the idea of what was to come. But when it played out I realized it happened exactly how I had expected minus one shocking turn of events. I feel a little let down because I was hoped to be surprised a bit more than I was, I was hoping it would lead to some big revelation I never saw coming, but I did see it coming and because of that there was no real revelation. Also I should point out that this story is of the slower variety that some people might not have the patience for, I really liked the pace though because the atmosphere created for haunting and beautiful passages.

I loved the variety of characters from mysterious Daniel, to flirty Cam, to loyal Penn, to wacky Arriane to all the other students and faculty. While I also liked main character Luce, and felt her shame and her confusion, I also felt like she came off as bit a bit of a fool. I wanted her to understand things quicker instead of waiting around while she finally figured it out.

The back story of Fallen is interesting and I can't wait until more of it is explained in book 2, Torment. I feel like Fallen introduced us to the world of Luce and Daniel and all of their friends and enemies and hopefully book 2 will get to the really good stuff!

Fallen will be released on December 8th
Genre: Young Adult
3.5/5 Stars
ARC provided by Amazon Vine
Posted by Alea at 6:00 AM