Boys, Girls and Other Hazardous Materials by Rosalind Wiseman 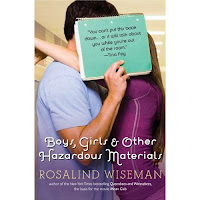 Looking for a new beginning after a terrible mean girl past, Charlie Healey realizes there’s no escaping high school drama.

Charlie Healey thinks Harmony Falls is the beginning of a whole new life. Middle school was brutal. But high school is Charlie’s big chance to start over and stay out of drama, except that on her first day she runs into Will, her ex–best friend, who had moved away. Now a varsity athlete and hotter than Charlie remembered, Will hangs with the crowd running the school. But Charlie doesn’t understand their power until an innocent delivery guy falls victim to a near-deadly hazing prank.

Torn between doing what’s right and her secret feelings for Will, Charlie must decide whether to turn in her very best friend or live with the guilt of knowing what he did.

Rosalind Wiseman’s first novel for young adults is a fresh, funny, and juicy read about friendship, betrayal, and how far some will go to be accepted.

When I heard Rosalind Wiseman was making her fiction debut for teens I just had to read it. I knew her non-fiction book, Queen Bees and Wannabes was the inspiration for the movie Mean Girls and knew this had to have some of that same spirit and it definitely did.

I love how in Charlie's past is a realization that mean girls walked all over her and she stood by and let them hurt people. She realized what had gone down, left the situation and those so called friends behind to start high school with that behind her. She thought she would be able to face off with any mean girls at her new school and do the right thing but she doesn't realize that even though you've been through it once you might not be an old pro by the second time. And this time the situation is different, it's mean boys that have never been stopped but will Charlie be the one to stop them?

I really liked the balance in this story, there are friends (new & old), family, school, and a little romance. It's all there and it just sucked me in. It's funny, it's serious, it's tender and real, it's awesome.

Boys, Girls and Other Hazardous Materials will be released on January 12th
Genre: Young Adult
4.5/5 Stars
ARC provided by publisher
Posted by Alea at 6:00 AM