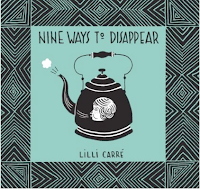 The charmingly peculiar short stories collected in Nine Ways to Disappear revolve loosely around the theme of disappearance and mark a new form for Lilli Carre. Skillfully drawn single panels explore a rich imagined world where actions have unexpected consequences and loneliness pervades, but not without a sense of the absurd. The stories read like vignettes that can span a day or decades, all drawn within a bordered page in intimate detail.

Each story unfolds quickly and features characters that run the gamut: joke-writing sisters gone awry, a wandering sleepwalker, a pearl with curious properties, an elusive coughing neighbor, a wide-eyed girl of questionable appeal, even a storm drain. Whether animate or inanimate, sweet or monstrous, Lilli has the ability to infuse them all with pathos, humanity, and humor.

I first saw some of Lilli Carre's work on the cover of The Best American Comics 2006 and reading an excerpt of her book Tales of Woodsman Pete within its pages. I went on to read Tales of Woodsman Pete in its entirety and I think it is my favorite of her full length pieces. Last year I read The Lagoon and never shared my thoughts on it because I'm not sure I completely understood it. So I was excited to see what Carre had come up with in Nine Ways to Disappear and I'm pleased to say it's pretty great!

Nine Ways to Disappear is an assortment of long and short stories told frame by frame, some with words others without. I loved that they all carried the theme of disappearing but it completely different ways. One of my favorite stories was Wide Eyes, about a man that ends up hiding between his girlfriend's eyes to get a break from her. I also liked The Pearl, which is about the journey of the pearl and who finds it, takes it, becomes one with it...

Let's talk about the format, the book is a little square that is pretty thick with pages. Because of that and the way it's bound it's pretty hard to keep those tiny little pages open so I had to fight the book to keep it open since I wasn't about to try and crack the spine.

Overall these are some clever little stories with a strangely awesome sense of humor!

Nine Ways to Disappear was released on April 30th 2009
Genre: Graphic Novel
4/5 Stars
Purchased on Amazon.com
Posted by Alea at 6:00 AM