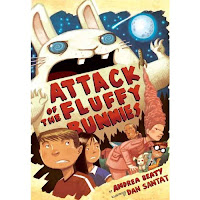 When Joules and Kevin Rockman’s parents drop them off at Camp Whatsitooya on their way to an International Spamathon, the twins expect a summer of marshmallows, campfires, and canoe trips. What they do not expect is to defend the earth from an invasion of sugar-addicted, murderous, seven-foot-tall rabbits from another galaxy. Happily, the Rockman twins, veteran watchers of the Late, Late, Late Creepy Show for Insomniacs, are unusually well-prepared for dealing with monstrous beings from outer space. If only their fellow campers were so lucky.
Andrea Beaty, author of several very funny picture books and a mysterious novel, here reaches new heights of hilarity and verbal dexterity in a novel sure to become a camp—ba-dum-dum—classic.

Attack of the Fluffy Bunnies is a extremely humorous novel/graphic novel hybrid for middle graders. Crazy giant bunnies that are sugar addicted and twins who's parents are obsessed with SPAM, and girls that are known as SmellyCat because they said their names all at the same time and that's what one of the characters heard... this author has a good sense of humor...

Aside from the humor I loved all the graphic bits mixed in from full panel pages or random advertisements thrown in, it really works for this book and helps break up the text.

I think this is a fun, humorous and suspenseful mystery for the younger set but adults might also have a good time with it.

Attack of the Fluffy Bunnies will be released on May 4th
Genre: Middle Grade
3.5/5 Stars
ARC provided by publisher
Posted by Alea at 6:00 AM