I'm pleased to welcome illustrator Joanne Renaud today for an interview! I first heard about Joanne when she did some pieces for author, Sarah MacLean's website, see the header here! And check out her deviantart site here!

1. Would you say you have always been an artist? Has it always been illustration and the graphic arts you were interested in?

Yes, I was always the class artist, scribbling on the margins of my homework. I loved writing too. This was the '80s and I loved Choose Your Own Adventure Books, and I was really into making my own books. One of the CYOA books I wrote when I was nine was called-- wait for it-- "The Secret of Unicorn Valley." It featured unicorns! And rainbows! And evil Chinese mafia guys!

2. I see you studied Graphic Design (me too!), is that something you also do along with illustration or do you just do straight illustration now?

I do it occasionally, although I prefer illustration. I designed the logo for "Dark Valentine," a new online magazine dedicated to dark fiction, which was just launched a few weeks ago. You can see it here. Our publisher wanted to use the classic images from Mexican loteria cards-- which are thankfully in the public domain-- and after some discussion we all settled on the freeware Lilith font, designed by David Rakowski. It was great having everyone's input, and I'm pleased with how it came together in the end.
3. What's the illustration process like for you? What happens from initial concept to final piece?

Well, most of the time, I go from the specs or the need of the project, do as much research as I can, work up some sketches, run it by the client, and then go from there. A lot of times when I'm doing multiple illustrations featuring the same characters, I conceptualize them in character sketches, and use that as reference for the rest of the project.
4.

What is your favorite medium to work in?

Acrylics probably, but I also like working with colored pencil on occasion. (I used to work with oils a lot in art school, but the fumes are deadly in a small space, and I usually have to work out of my bedroom.) I would like to learn how to paint digitally soon too, although I cringe at the idea of spending even more time on the computer than I already do.
5. What is your favorite thing to draw?

Hot men and cute women in awesome costumes! I also like to do a lot of character portraiture, based on actors I find intriguing-- like Chris Sarandon, who made such a wonderful villain in "The Princess Bride." I used to sketch a lot in cafes and the like, but I've fallen away from that since I started working professionally. I would like to start doing that again, since you see so many interestingly dressed characters in New York .
6. Does a lot of research happen before you put pencil to paper? Do you draw from source material or does it all come straight from your mind?

Research is probably one of the most important stages of what I do, since a lot of times a project is about something I know nothing about, like Mansa Musa, a king in medieval West Africa. Even if it's about something I'm familiar with, like the Regency and 1820s characters commissioned by Sarah MacLean for her website, I need to refresh my 'inner eye' so the images don't come out looking hackneyed. 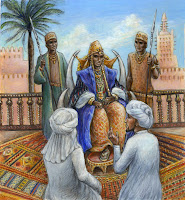 Research also includes looking at movies, other artists' interpretation of the subject matter, and sometimes even listening to period-appropriate music. I'm about to start on a book about John Henry, and last night I was listening to different versions of the Ballad of John Henry, including a fantastic blues version by Mississippi Fred McDowell.

7. You recently moved from LA to New York City, tell us what that's been like? What's different, better, worse?

Well, the food is more expensive. But I don't have to worry about having a car or insurance, which is nice. I find myself getting out more. In LA, driving everywhere really curtailed my social life, so I ended up just hanging out with three people, and watching way too much TV. It's Saturday night in North Hollywood ? It must be Law & Order time!

The negative: library hours are really short here, compared to what was back in LA. I'm also afraid the independent bookstores left in New York are not up to caliber of bookstores back in LA, which are very genre-friendly. I love vintage fantasy, romance and horror-- the more obscure the better-- and that's a bit hard to come by here. NY indie bookstores are great for literary fiction, which really doesn't interest me.

8. I love your taste, I find it very eclectic, share with us a few things you are into right now?

I've actually been writing a lot lately. Right now I'm working on a gothic romance set in the mid '60s, against the background of the British Invasion and Warhol's Factory. I'm also working on a few short stories for Dark Valentine magazine-- one's contemporary urban fantasy with (non-sparkly ) vampires, and the other's set in ancient Persia. Eclectic? I'm not sure what you mean!

I'm especially excited to be working as Dark Valentine's art director. The amazing graphic designer/illustrator Sarah Vaughn-- who designed the the dress-up doll for Gail Carriger's Soulless, and the Regency dress up dolls showcased on Smart Bitches Trashy Books-- designed our website, and it's gorgeous. She did a wonderful job. Our first issue will be out later this spring, and it will feature a cover painted by me, and stories by the talented Christine Pope, Katherine Tomlinson, Robin Claire Barnes, and many others.