Something About You by Julie James 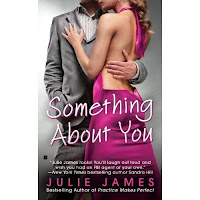 There's something about Julie James...

Staying overnight in a luxury hotel, Assistant U.S. Attorney Cameron Lynde overhears a high-profile murder involving a U.S. Senator. Special Agent Jack Pallas is assigned to the investigation-the same Jack Pallas who still blames her for nearly ruining his career three years ago. Now the pair will have to put their rocky past behind them, focus on the case at hand-and smother the flame of their sizzling-hot sexual tension.

Something About You is my second Julie James book and I think I've found a new favorite author! Once again Julie's heroine, Cameron is very confident and good at what she does, she's not sitting around waiting for a man to fill her life. Through a series of (murderous) events she finds herself thrown together with Jack Pallas the glowering Special Agent who she was mutually attracted to before she pissed him off and he embarrassed her three years ago.

I love seeing what hoops characters in romance novels have to jump through to end up in a situation where the guy and the girl are stuck together, usually against their will... at first. I just love it!

The mystery in this book was great, it's not so much who, because you find out early on, but how, how it is going to end, all the while Cameron and Jack's relationship is growing. I also love how the secondary characters are important in Something About You, it's not strictly about Cameron and Jack. They both have friends and things they do outside of being together which makes the story very well rounded.

I mentioned in my review of Just the Sexiest Man Alive that it borders on Chick Lit and I think Something About You veers more so into the Romance genre, especially with the naughty bits! Can't wait to read more from Julie James!

Something About You was released on March 2nd 2010.
Genre: Contemporary Romance
4.5/5 Stars
Purchased at Borders
Posted by Alea at 6:00 AM