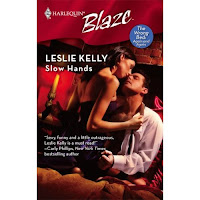 His price? Pure pleasure... This is Maddy Turner's lucky day. The civilized society girl just bid on sexy rogue Jake Wallace at a charity bachelor auction and won! But Maddy knows Jake's dirty little secret. And it should keep her from trying out her new boy toy. Too bad she can't stop herself from indulging in raw, quite uncivilized sex all the same....

Jake Wallace is utterly bewitched by Maddy and utterly bewildered. How can this tantalizing woman melt so rapturously under his ministrations one moment, then turn into a haughty queen the next? He's determined to get to the bottom of Maddy's agenda. One slow, delicious inch at a time...

My first e-book! Yay! Ok onto the actual book. Slow Hands was my second book from the Blaze line and I liked it a lot more than my first one, which was a collection of short stories that were so short I didn't really buy the chemistry. In Slow Hands Jake and Maddy actually get the page count to get to know each other to make the story believable.

I love the whole idea of mistaken identity. When Maddy first bids on Jake she thinks he's a male escort, a male escort that she has a chemistry with, but still a male escort. It takes Jake awhile to figure this out and when he does he's dumbstruck but also kind of finds it funny, he's just an EMT that wants to do his family and sisters proud! I thought it was pretty funny!

I really liked their relationship, Maddy doesn't find herself lovable for many reasons including her appearance and her family history but Jake is awe-struck by her and wants her to know it. So as you might suspect their chemistry was great!

Overall Slow Hands has resorted my faith in the Blaze line and I can't wait to check out more books by Leslie Kelly, including Heated Rush which tells the story of the real male escort and the women that bid on him thinking he was an EMT!