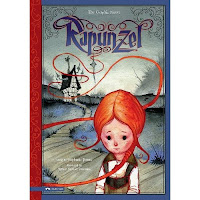 Long ago, a beautiful maiden named Rapunzel lived a life of loneliness. Taken at birth by an evil witch, she remained hidden, locked within a giant tower. Then one day, a prince heard her voice through the forest. To reach her, he must climb Rapunzel’s lovely locks and avoid being caught by the witch.

Of the four children's graphic novels from Capstone I've read I think the books illustrated by Jeffrey Stewart Timmins are my favorite. What a beautiful mix of dark, haunting imagery created with the soft touch of watercolor. The way he creates his characters are so interesting, I especially liked the Witch in Rapunzel. The only thing I would have changed would have been to have the speech bubbles and text also handdone instead of computer generated, I feel like it took away from the magic of the illustration and sort of sticks out like a sore thumb.

The actual story was a great rendition of the fairy tale I remember. I just love that witch! And as with the other books from the Graphic Spin series you can find a glossary, history, discussions and writing prompts in the back of the book. The reading level of Rapunzel is 2.5 or L. This would be a great introduction to the fable for children.