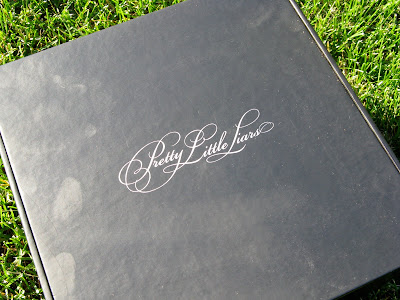 As some of you know I was invited by ABCFamily to participate in the Pretty Little Liars Secret Keeper Game. I had planned to post something this week about it but now with my latest task it becomes urgent. I am at a serious risk of having one of my secrets revealed unless I can get 13 of you to help me!

But first back to the beginning... the week before BEA I was in D.C. with my relatives, checking my email about twice a day on dial-up. One night I got this email that seemed to be too good to be true from ABC Family inviting me to take part in the Pretty Little Liars Secret Keeper Game (to promote to upcoming Pretty Little Liars on ABC Family premiering June 8th). It didn't say much besides that they would be sending me a package the next week with a smart phone (mine to keep for free after the game) and I would be playing the game as one of the characters. (I'm playing as Hanna.)

Well as you can imagine I jumped at the chance. It sounded so awesome and so involved I had to take part! I actually made my sister keep an eye out for the package's arrival and she gave me a slight sneak peek as to what was inside but anyhow... when I got home last Saturday I opened it up and WOW.

I won't be showing many pictures here, I think I'll save those for when I do my recap after the game is done. But you can see the box the game kit came in above. And inside was an iphone for me to play the game on (mine to keep for free after the game) and a secret object which I will not reveal here and a whole lotta dirt! And sort of an feeling of mystery and dread (yeah that really was in the box ;)).

So far there have been 4 tasks and today the 5th which brings me to the point where I really need your help! At least 13 of you to be exact!

Today A (the keeper of all of our secrets) told me that if I don't get 13 of you to share stories of how you have flirted to get out of trouble like ASAP one of my secrets will be revealed, and I just can't have that!

To help me out please post your story on this ABC Family Message board HERE in the thread I've created. And for this to work out I need to be mentioned by name. I guess go with Alea?

Thank you for helping me! Please let me know if you have any questions, comment, email me!

I think once the game is over I'll give a full recap of my reactions and the tasks I was asked to complete, so far it's been a ton of fun if not slightly creepy and confusing! I better watch my back for A, she knows too much!
Posted by Alea at 11:58 AM