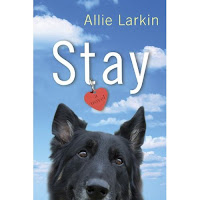 
Something Borrowed meets Must Love Dogs in this big- hearted debut about friendship, love, and a German Shepherd named Joe.

Savannah "Van" Leone has been in love with Peter Clarke ever since she literally fell head over heels in front of him on the first day of college. Now, six years later, instead of standing across from him at the altar, Van's standing behind her best friend Janie as maid of honor, trying to mask her heartache and guilt as Janie marries the only man Van's ever loved. Before, Van's mother died, she told Van never to let Peter go, but as the couple exchanges vows, Van wonders if her fairy tale ending will ever come true.

After the wedding, Van drowns her sorrows in Kool-Aid-vodka cocktails and reruns of Rin Tin Tin, and does what any heartbroken woman in her situation would do: She impulsively buys a German Shepherd over the Internet. The pocket-size puppy Van is expecting turns out to be a clumsy, hundred-pound beast who only responds to commands in Slovak, and Van is at the end of her rope... until she realizes that this quirky giant may be the only living being who will always be loyal to her, no matter what.

Van affectionately names her dog Joe, and together, they work to mend the pieces of Van's shattered heart. And it certainly doesn't hurt that Joe's vet is a rugged sweetheart with floppy blond hair and a winning smile. But when the newlyweds return from their honeymoon, Van is forced to decide just how much she's willing to sacrifice in order to have everything she ever wanted, proving that sometimes life needs to get more complicated before it can get better.

Warm and witty, poignant and funny, Stay is an unforgettable debut that illuminates the boundlessness of love and marks the arrival of an irresistible new voice.

From the cover you might think to yourself that Stay is a dog book. Well sorry, but no. Yes there is a dog, that is a character and he shows up as much as other characters but the book is by no means solely focused on him. I wouldn't call myself a dog person so for me this was great, but strangely enough Joe (the dog) had such a great presence and personality you can't help but love him! He helps pull Van out of her funk and for that he's completely lovable.

Van, I loved Van's story. With one foot in the world of privilege and the other not so much. She has to sit there and let her heart take a beating when her best friend marries the love of her life from college, it was so heartbreaking to read. What I really liked about this book was that this plot line comes up in a lot of books but here it was really explored to the fullest and was extremely realistically, it all hangs out. For awhile there, really until the end I wasn't sure what was going to happen and I love the author for it.

Van is such a realistic person, she makes mistakes, screams her feelings loudly but also keeps them locked up so tightly it kills her. Because of her dog Joe we are introduced to veterinarian Alex who seems like a really caring person. My only issue with the book is I wish his relationship with Van had a bit more time to develop, I feel like he's there in the beginning and end of the book but in the middle he sort of isn't present so it feels like their relationship doesn't have the full book to develop. I would have loved to have seen a bit more of him.

Overall I found this to be a wonderful book, so touching and realistic but also hilarious, it was a great mix of my favorite things!

Stay was released on June 10th
Genre: Chick Lit
4.5/5 Stars
ARC provided by Amazon Vine
Posted by Alea at 6:00 AM