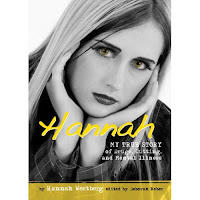 Hannah is a girl interrupted.

For Hannah Westberg, life has been one big emotional roller coaster. As a girl, her mother was in and out of mental hospitals, so when it was her turn to visit the psych ward following a suicide attempt the summer after eighth grade, she had an idea of what she was in for. But that was only the beginning of Hannah's journey.

Over the next five years, Hannah has engaged in dangerous behaviors--from pill popping and excessive dieting to cutting--and paid a high price. Her depression, self-harm, and suicidal tendencies have landed her in rehab and therapy and with a diagnosis of borderline personality disorder. But though she may have a label for her mental illness and tools for coping, for Hannah, life is still something she takes one day at a time.

Hannah’s story is a hard one to take in. She lays it out honestly and you feel for her. What I really liked about Hannah’s journey is she admits and realizes what her problems are, and she knows there isn’t some overnight fix but that she has to take it day by day and if she falls off the horse she has to get back on. She was really inspiring.

I found the structure of Hannah to be sort of an issue. Instead of sharing her story in a linear fashion, it’s by topic but the time period she is talking about overlaps with other sections of the book. For instance, when finding out she had an eating disorder I realized that information really impacted a previous chapter, she was discussing events from that same time period but since it wasn’t the topic at hand it wasn’t mentioned at all. I found it hard to piece everything together as far as the order things had happened in and her mind frame, a similar problem I had with last year’s release from the series, Marni.

Overall, an engaging story with a structure that was lacking.

I also have the opportunity to give away some books from the series!

There will be 4 winners, 1 person will win a set of all three books (Hannah, Alexis, and Rae) and then 3 other people will win one of the books, one winner for Hannah, one for Alexis, and one for Rae.

Here is how to enter!

The giveaway is open to addresses within the US/Canada only (no P.O. Boxes).

The giveaway will end August 30th at 6:59 pm Central Time.

**Prize provided by the publisher**
Posted by Alea at 6:00 AM