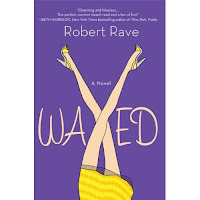 Yank. On the surface, glamorous Carolina Impresario---big sister and owner of Impresarios---unapologetically wants it all, but secretly she is caught between her successful boyfriend and the only man she has ever truly loved.

Pluck. After a painful divorce, middle sister Anna reluctantly reenters the workforce and puts on a brave face while attempting to raise her children, one of whom is decidedly different.

Tear. Newlywed Sofia is a hybrid of her two older sisters: She loves the idea of a domestic life like Anna’s, but is entranced by New York nightlife and a new best friend, resulting in some major complications at home.

Amid the sticky confines of a perfectly manicured world, these three sisters search for love, friendship, and better versions of themselves.

Waxed is a funny and heartfelt novel that illustrates the lengths to which some women will go to present a seemingly flawless exterior, even when it involves pain. . . .

By the sound of it, Waxed looked like a fun but heartfelt chick lit story about 3 sisters. And in a way it was but I was left feeling like I didn't really know the sisters as well as I had wanted to. I wasn't really invested in their stories. But I will say that the Waxing clients did make for some hilarious moments here and there!

Don't get me wrong all three sisters are experiencing troubles in their lives which make for a really interesting book. But in the end I wasn't very invested. I felt like the sisters a lot of the time didn't even like each other. And the way that the story was told left me waiting a lot of the time to find out what I missed in the gap of time that the author doesn't share with us and I felt the ending didn't have much resolution, it just kind of ended.

Of the three sisters I found Sofia's story to be most interesting. She's a young married woman that's settled into a routine with her husband until a new friend helps her see what kind of fun she's missing, sitting at home waiting for her husband to come home.

Overall, if you are looking for something a little bit different in the Chick Lit genre that's a bit more serious this may be for you!

I also have the opportunity to give away a copy of the book!

Here is how to enter!
Fill out the giveaway entry form here.

The giveaway is open to addresses within the US only.

The giveaway will end September 6th at 6:59 pm Central Time.

**Prize provided by the publisher**
Posted by Alea at 6:00 AM