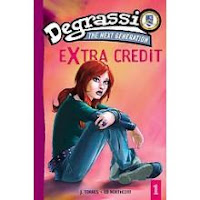 It's the end of Ellie's senior year, and as though final exams aren't enough to worry about, she's been placed in a compromising position by one of her bosses at a comic book company. Is quitting her only option?

J.T. turns to the Internet to help cope with the recent troubles in his life. But now he spends most of his time locked in his room, and he can't seem to move on. Is his new habit just making his problems worse?

I want to start off with some information that covers all 4 of the Degrassi Graphic Novels. They read just like episodes of the show, with two main plotlines. All 4 take place basically in the summer between Seasons 5 and 6 with some overlap into those 2 seasons. I'm not sure if I would suggest them for people that aren't familiar with the show, they just kind of jump in where the show left off so there isn't much framework for someone that is new to these characters.

Also, all 4 are illustrated by different people, I'm going to guess the reason for this was because these all came out in a short amount of time and it would be impossible for 1 person to illustrate them all that fast. Though because of the way the different artists draw the characters it helps that there is a page near the front of each book that shows all the characters who are main players in that specific story.

Onto the book, Ellie's internship at a Comic Book company alternates with J.T.s summer at home trying to get over his trying year. I definitely enjoyed Ellie's story more so, there were some great comic references and we got to see more of the characters in her story.

I enjoyed the art, especially the full page illustrations, they provided more detail and in turn more expression on the characters faces.

I think the author did a great job of staying in tune with the show right up to the signature ending without much resolution (which I found hilarious when I first started watching the show). It's hinted that that things will turn out ok but you never actually see it happen! 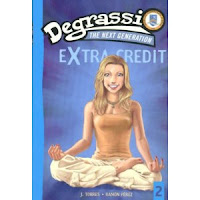 Emma gets her groove back with the help of group therapy and a family trip to New York City. But as she returns to her old self, her relationship with Peter begins to suffer. Is he helping Emma recover--or holding her back?

While coaching at basketball camp, Jimmy finds himself dealing with the fallout of a hazing accident. Was the initiation just a prank, or did it cross the line? When the police get involved, Jimmy is faced with a touch decision?

I think Suddenly Last Summer is my favorite of the 4 graphic novels, and that's probably because part of it takes Emma and Manny and Emma's family to New York City! The other story involves Jimmy at basketball camp.

There is a great montage in the book that shows Emma and Manny in New York and the backgrounds are actual posterized photos of the city which makes for a really nice effect. I really like the sleek and stylized illustration this artist used as well, definitely my favorite of the bunch. I also really liked the Alice in Wonderland references.

All in all another great graphic novel from the Degrassi family!