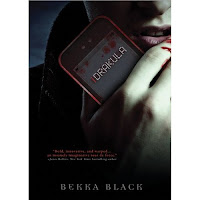 18-year-old Jonathan Harker is diagnosed with a rare blood disorder after visiting a Romanian Count. His girlfriend Mina and a pre-med student named Van Helsing team up to investigate the source of the disease. The teenagers discover a horrifying truth: the Count is a vampire. The harrowing events unfold through emails, text messages, web pages, Twitter feeds, and instant messaging-the natural modernization of Bram Stoker's original Dracula, which was written in letters, diary entries, and news clippings.

While I've sort of been put off paranormal lately, iDrakula called to me, with it's unique way of storytelling and I'm so glad I picked it up!  Not having read the original of even seen a movie version of Dracula (which I did so afterward and of the two iDrakula wins) it was fun to experience the story in one of my favorite ways, through emails, text messages, web pages etc. I've heard that the original is told in letters and diaries, so I think it's really fun to see how that was modernized in this book too!

It really sucked me in and I finished it in about 2 sittings which never happens for me. I definitely thought it was creepy and mysterious. But at the same time I felt sort of removed from the situation, but I think that is just the case with this story because of the way it's told, even the original. One thing I would have liked was just more, the story moves at such a quick pace it's over like THAT. So maybe a little bit more detail would have been nice!

Reading iDrakula has opened me up to exploring other versions of the story and that I'm definitely excited about!