Wow I didn't realize I had so much to share this week! But when I looked at Raverly I realized there was A LOT! 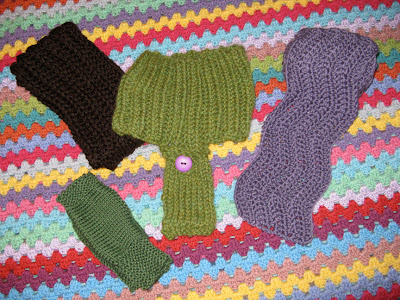 This first picture is 4 completed Christmas presents, the brown scarf and green fingerless gloves I had been working on previous weeks and they are now done! The green strange looking thing in the middle is a cowl with an ipod holder from the book CowlGirls which finally arrived last week! It's called Wrapper's Delight! I pretty much did that one in a night, was a lot of fun!
Yarn used:
1 hank of Misti Alpaca Chunky Color 7238
The purple scarf is based on Attic24's Ripple blanket, when I started my blanket a few months ago I noted how cute it would look as a scarf if you just did a few rows so that's what I did!
Yarn used:
Less than 2 skeins of Comfy Bulky Vinca 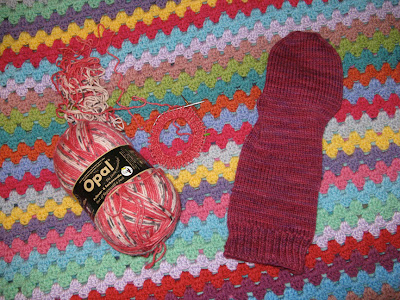 Yesterday was supposed to be my last sock class but the teacher decided to extend it another week (how nice!) so last night I finished my sock! She suggested we go down to a sport of dk weight for our next pair and talked about how Opal had yarn that looked like animals and then she mentioned a ladybug, and I needed that ladybug yarn so bad! So even though I only have 1 sock done I had to start on a ladybug sock!
Yarn used:
Opal 2749 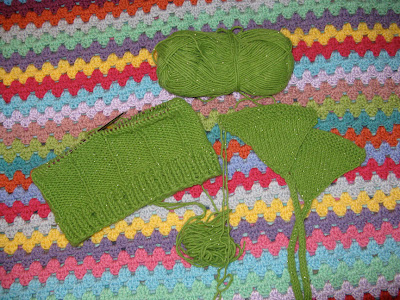 This hat is another present, I actually finished it Monday and then decided that when I thought it was too long and skipped about inch of work, I was totally wrong so I ripped it back out! The ear flaps will have buttons sewn on and will button to the hat. You can see the pattern here, totally cute! It's a little bigger than I had hoped but hopefully the recipient of it will like it!
Yarn used:
1 skein Red Heart Shimmer Lime 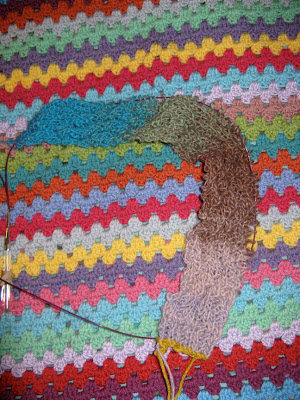 I bet you are wondering what this is, well I actually don't know! Because it's Week 1's portion of the Mystery KAL I'm participating in! I'm so excited for part two! I learned the provisional cast on and used short rows in something other than a sock!
Yarn Used:
Bernat Mosaic Ambrosia 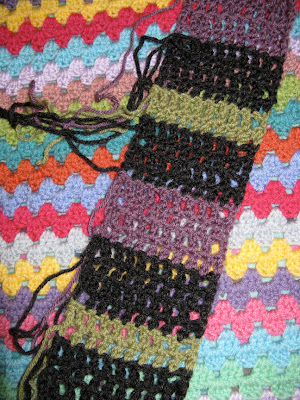 This is the start of another Shades of Plaid scarf for a present. I'm sort of all over the place as you can see so I haven't done much on it.
Yarn used:
Vanna's Choice
Dusty Green
Dusty Purple
Dark Gray Heather 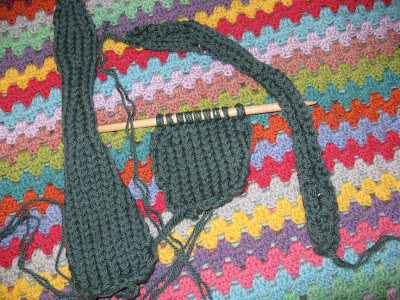 And finally, Sunday I missed 2 awesome yarn sales due to ice causing 300+ accidents before I woke up that morning so I bought this French Press Felted Slippers pattern I had my eye on for awhile. I'm really excited to try felting!
Yarn used:
Patons Classic Wool Jade Heather

For more crafty goodness be sure to stop over at WIP Wednesday! And find me on Raverly as mint910.
Posted by Alea at 2:33 PM