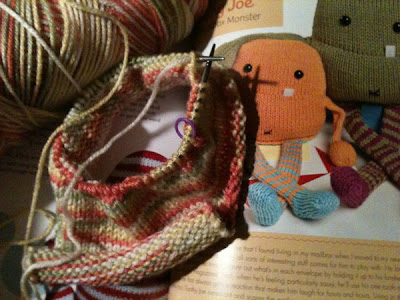 Ok sorry I'm a dork lol! But thanks to Tami I'm finally working on something other than my gray scarf! She suggested we both knit something from The Big Book of Knitted Monsters since we had it so I pulled out and book and picked Toothy Joe the Mailbox Monster because he seemed pretty easy. At first I had no idea what yarn to use and then it came to me. my TLC Essentials in Coraline! I had bought it to make some mittens and then decided against and never could think of anything to do with it, until now!
He doesn't look like much but hopefully by next Wednesday he'll look a little more monstery instead of blobby. To get the line of his mouth I had to bind off half of the stitches and now I'm trying to pick them back up again, but it is tight in there, ack!

For more crafty goodness be sure to stop over at WIP Wednesday! And find me on Raverly as mint910.
Posted by Alea at 9:07 PM