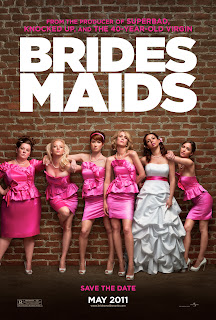 **I was hoping to post this in the morning for anyone that was planning to head out and see the movie tonight and wanted some info but as a lot of us known blogger was down. :( **

Remember forever ago when I used to review movies, you know when they were more than a 1 sentence reaction? Well it's finally time for another one of those! Last week I had the exciting opportunity to see a screening of Bridesmaids and boy was it funny!

It was a great balance of everything in love in a funny movie! Tons of laugh out loud moments and I mean tons but also a good amount of heart. It's definitely not a chick flick, daring to go to a few OMG they did not go there places having me practically in tears from laughter. But it also explores friendships between women and how they can change due to any number of factors.

Some of my favorite moments include a plane and a cameo by Melissa McCarthy's husband, a chocolate fountain, lip syncing and 2 British siblings. I definitely can't wait to watch this movie again! 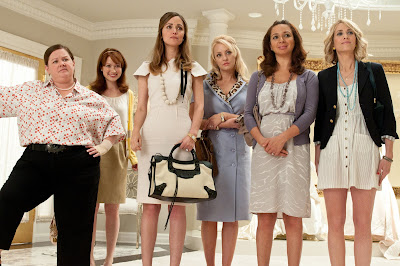 First let's talk about the cast, so so many wonderful actresses and a few wonderful actors as well.
The movie stars Kristen Wiig (Saturday Night Live) as Annie who also co-wrote the movie as the best friend and Maid of Honor of Maya Rudolph (Saturday Night Live, Away We Go) as Lillian the bride, and Rose Byrne (Damages) who I always thought more as a dramatic actress as Helen the very put together new friend of Lillian. The cast of bridesmaids is rounded out by Melissa McCarthy (Gilmore Girls) like you have never seen her before as Megan, Ellie Kemper (The Office) as Becca and Wendi McLendon-Covey (Reno 911) as Rita. So definitely a very talented and hilarious cast.
You'll also see a cameo appearance by Jon Hamm (Mad Men) as Ted who I've always thought should do more comedy, 30 Rock and Saturday Night Live come to mind as HILARIOUS and Chris O'Dowd (The IT Crowd) takes the cake as my favorite male cast member, I love this guy!
I do wish we would have seen more of Becca and Rita, their storylines were much smaller than the rest of the women. I could not get over Melissa McCarthy and Megan, in a lot of scenes she stole the show. 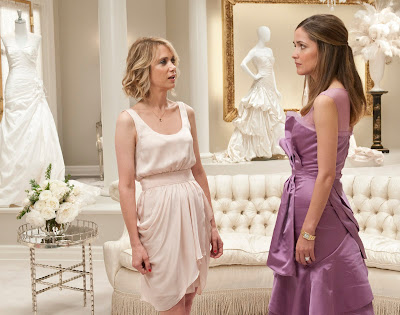 Some of the funniest scenes were between Annie and Helen, Lillian's two best friends. They are complete opposites, Annie's life has pretty much fallen apart while Helen's cannot be more put together. The tension between them is hilarious, though they have just met for the first time at Lillian's Engagement party it doesn't stop them from going at it from the very start. 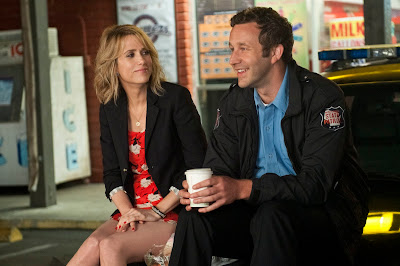 Oh man how I adore Chris O'Dowd and I had no idea he was even in this movie! When he came on screen for the first time my friend had to shush me because I was so excited and started chattering.
One super random comment, Kristen Wiig has the best earrings in this movie, did anyone else notice this? So if you go to see the movie I hope you enjoy it and stop back to tell me what you think!
Synopsis:


This spring, producer Judd Apatow (Knocked Up, Superbad) and director Paul Feig (creator of Freaks and Geeks) invite you to experience Bridesmaids. Kristen Wiig leads the cast as Annie, a maid of honor whose life unravels as she leads her best friend, Lillian (Maya Rudolph), and a group of colorful bridesmaids (Rose Byrne, Melissa McCarthy, Wendi McLendon-Covey and Ellie Kemper) on a wild ride down the road to matrimony.


Annie’s life is a mess. But when she finds out her lifetime best friend is engaged, she simply must serve as Lillian’s maid of honor. Though lovelorn and broke, Annie bluffs her way through the expensive and bizarre rituals. With one chance to get it perfect, she’ll show Lillian and her bridesmaids just how far you’ll go for someone you love.


And I have some 2 Bridesmaids Survival Kits to share with 2 of you!


Entries left in the comments of this post will not be counted.

The giveaway is open to addresses within the U.S.