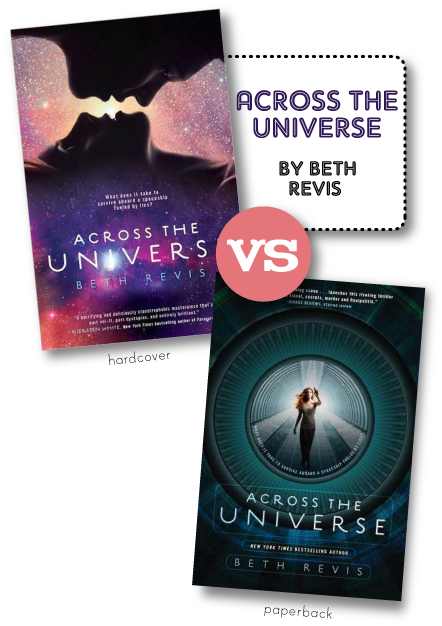 A love out of time. A spaceship built of secrets and murder.

Seventeen-year-old Amy joins her parents as frozen cargo aboard the vast spaceship Godspeed and expects to awaken on a new planet, three hundred years in the future. Never could she have known that her frozen slumber would come to an end fifty years too soon and that she would be thrust into the brave new world of a spaceship that lives by its own rules.

Amy quickly realizes that her awakening was no mere computer malfunction. Someone-one of the few thousand inhabitants of the spaceship-tried to kill her. And if Amy doesn't do something soon, her parents will be next.

Now Amy must race to unlock Godspeed's hidden secrets. But out of her list of murder suspects, there's only one who matters: Elder, the future leader of the ship and the love she could never have seen coming.

When it comes to looking purely at the design I'll give it to the Hardcover, it basically shouts LOOK AT ME! But based on the summary I can see why the cover was changed for the Paperback though it doesn't scream in the same way. Both covers have some beautifully rich colors going on though, yum.

Thanks to StoryLoverX who suggested this H vs P!
Have you spotted a Hardcover vs. Paperback you would like to contribute? Send me an email!