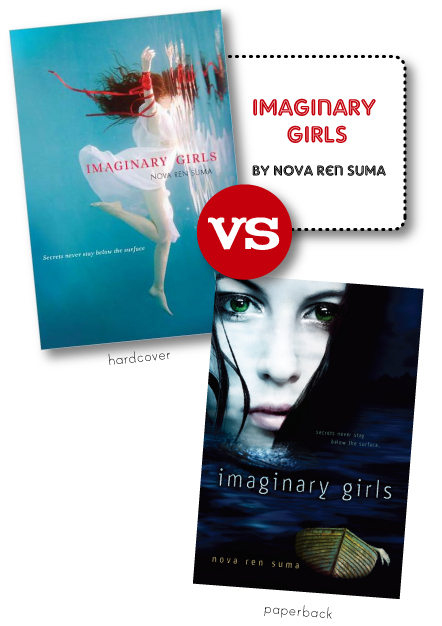 Chloe's older sister, Ruby, is the girl everyone looks to and longs for, who can't be contained or caged. When a night with Ruby's friends goes horribly wrong and Chloe discovers the body of her classmate London Hayes left floating in the reservoir, Chloe is sent away from town and away from Ruby. But Ruby will do anything to get her sister back, and when Chloe returns to town two years later, deadly surprises await. As Chloe flirts with the truth that Ruby has deeply hidden away, the fragile line between life and death is redrawn by the complex bonds of sisterhood.
Let me start by saying I haven't read this book (I have it but haven't read it). I'll admit that one of the reasons I bought this book was because of the hardcover, I love the way it hints at a mystery instead of what in my opinion looks like giving away plot points with the paperback. Honestly I'm kind of turned off by the paperback cover. It looks like a giant head floating in the ocean. And why is the girl's hair so clumpy on the right side? It's like a wall of hair.
Thanks to Marta who suggested this H vs P!
Have you spotted a Hardcover vs. Paperback you would like to contribute? Send me an email!
Posted by Alea at 6:00 AM