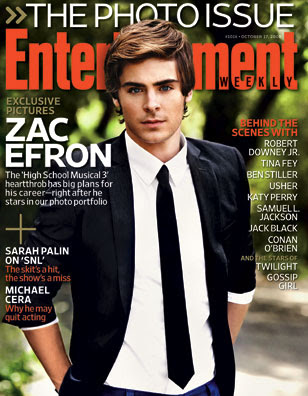 I don't think I've talked about one of my favorite magazines, Entertainment Weekly in a long time. Probably since before any of you were reading lol! Well I have several favorite issues, one of them being the photo issue. This is a pretty good one!
There is a Hollywood at Work section featuring Tina Fey on the set of 30 Rock! Another great piece is The Hardest Working Actors in Showbiz, which features all those actors that you remember from this and that but you can never remember their names! It's a great article including Tina Majorino from Napoleon Dynamite among other things, Stephen Tobolowsky who has a whole movie that's him telling stories about his life in the movies, Stephen Toblowsky's Birthday Party and John Slattery from Mad Men. I love watching a show or movie and screaming, usually to myself "Oh that guy!" Another great feature is The Year's Best Outtakes from their photo shoots throughout the year.
Past issues have included themed photo shoots with actors and other great things. I miss those. I think this issue has gotten slimmer each year but it's definitely still worth checking out!
This is one of my favorite magazines, what's one of yours?
Posted by Alea at 2:16 PM