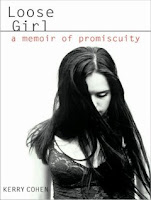 From the publishers website:
Kerry Cohen is eleven years old when she recognizes the power of her body in the leer of a grown man. Her parents are recently divorced and it doesn’t take long before their lassitude and Kerry’s desire to stand out—to be memorable in some way—combine to lead her down a path she knows she shouldn’t take. Kerry wanted attention. She wanted love. But not really understanding what love was, not really knowing how to get it, she reached for sex instead.

Loose Girl is Kerry Cohen’s captivating memoir about her descent into promiscuity and how she gradually found her way toward real intimacy. The story of addiction—not just to sex, but to male attention—Loose Girl is also the story of a young girl who came to believe that boys and men could give her life meaning. It didn’t matter who he was. It was their movement that mattered, their being together. And for a while, that was enough.

From the early rush of exploration to the day she learned to quiet the desperation and allow herself to love and be loved, Kerry’s story is never less than riveting. In rich and immediate detail, Loose Girl re-creates what it feels like to be in that desperate moment, when a girl tries to control a boy by handing over her body, when the touch of that boy seems to offer proof of something, but ultimately delivers little more than emptiness.

Kerry Cohen’s journey from that hopeless place to her current confident and fulfilled existence is a cautionary tale and a revelation for girls young and old. The unforgettable memoir of one young woman who desperately wanted to matter, Loose Girl will speak to countless others with its compassion, understanding, and love.
Loose Girl: a memoir of promiscuity was engaging from beginning to end. I can tell I enjoy something when I can read for at least 30 minutes straight without paying attention to anything else (I usually get distracted very easily). This book hooks you and doesn't let go of you until the end. Around the age of 11-12 Kerry discovers the world of boys and how she can capture their attention and hopefully love as well. She basically becomes addicted to boys and eventually sex as well. She reflects it back onto her upbringing, her mom basically leaving her and her sister behind to start her own life and her father that basically let her do whatever she wanted. I actually identified more so with Kerry's sister, Tyler so it was interesting to read about how Kerry didn't understand her sister and her behavior.
Seeing what Kerry has gone through and what she has achieved in her life definitely makes her a role model. People can't be "cured" of their addictions with the snap of their finger. She realizes that she can take it day by day and can still be OK. She has written fiction and also is a practicing psychotherapist.
I do wish the ending/resolution didn't happen so quickly but this is a memoir so she wrote it how it happened. Maybe I would have liked the book to extend a bit further into her life than where it stopped. All and all a very engaging and important memoir.
4/5 stars
ARC provided by LibraryThing Early Reviewers Program
This is another of many great memoirs, what is one of your favorites?
Side note: I tried something a little bit different this time. I used the official summary for the book instead of my own very short and holes filled summary and gave a star rating. I haven't done this before but I thought maybe it would give a bit more completeness to the review. Anyone have thoughts on this? What do you think works best?
Posted by Alea at 9:19 PM