Something Happened by Greg Logsted 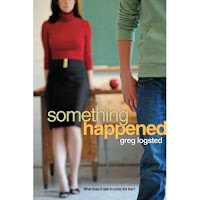 From Publisher's Website:
"All around me I see people laughing, joking, and walking around with these huge, goofy smiles plastered on their faces. I've begun to wonder how they do it, and more important, will I ever be able to be like that again?"

Five months after his dad's unexpected death, Billy Romero is still struggling with the loss. Billy's mom spends more time talking to her Bluetooth than to him, and his best friend, Ziggy, just doesn't get it. There's no one who understands how alone Billy feels...except his new English teacher, the young and beautiful Miss Gate.

Miss Gate offers support and friendship, even giving Billy extra help with his writing outside of school. Billy isn't really sure how he feels about spending so much time with his teacher. It's a little weird, but it's also kind of exciting that someone like Miss Gate wants to hang out with him. But the closer they get, the more Billy wonders what kind of friendship this really is....
I think because of the cover I assumed that Billy was a high school student of maybe 16 or 17, he was actually a 13 year old in 8th grade. I feel with student/teacher relationships it can go probably one or two ways. #1: The teacher is a predator and their student is the innocent prey or #2: The student isn't completely innocent and encourages the teacher's behavior. I would put Something Happened into the first category. To me, Billy was completely innocent. He was curious and confused but innocent.
This book definitely kept my attention, I had my eyes on Miss Gate/Tess the whole time waiting to see how she was going to behave around Billy. Waiting for that moment where something happens. Billy was so lost, he lost his father, his mother isn't around much and his friends just don't understand anymore. He found a friend in Tess, someone to talk to and someone to just have fun with. Always late for the bus, Billy always ends up sitting next to Amy on the bus and they slowly begin to form a friendship which becomes as important to him as his friendship with Tess. He finds himself trapped between Tess and Amy trying to keep them both happy. Tess's reaction to Billy being unable to attend a poetry group with her one evening is one of the first concrete glimpses of her true personality.
I really liked this book, I was very very very curious to see how it unfolded. I was not disappointed. The only thing that I found lacking was maybe a bit more to the ending, it was satisfying but wrapped up a bit too quick for me.
Have you ever read a book that deals with a student/teacher relationship?
4/5 Stars
ARC provided by publisher
Something Happened was released November 4th.
Posted by Alea at 10:08 PM