We Bought A Zoo by Benjamin Mee 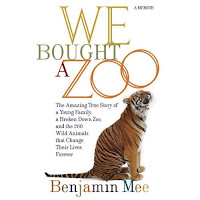 From the Publisher's Website:
In the market for a house and the adventure of a lifetime, Benjamin Mee decided to uproot his family and move them to an unlikely new home: a dilapidated zoo on the English countryside, complete with over 200 exotic animals. Mee, who specializes in animal behavior, had a dream to refurbish the zoo and run it as a family business. Naturally, friends and colleagues thought he was crazy.

The grand reopening of the zoo was scheduled for spring, but there was much work to be done and none of it easy for these first-time zookeepers. Tigers broke loose, money ran low, the staff grew skeptical, and family tensions ran high.

Then tragedy struck. Katherine had a recurrence of a brain tumor, forcing Benjamin and his children to face the heartbreak of illness and the devastating loss of a wife and mother. But inspired by the memory of Katherine and the healing power of the incredible family of animals they had grown to love, Benjamin and his kids resolved to move forward. The Mee family opened the gates of the revitalized zoo in July 2007.

Brimming with energy and insight, We Bought a Zoo is a profoundly moving portrait of an ordinary family living in the most extraordinary circumstances.
This was a pretty powerful memoir. It combines a family, a dream, hard work, and tragedy. I think for the most part all the elements are pretty well balanced. I was rooting for this family and the success of their zoo and dream. They worked tirelessly to make improvements for the animals and zoo while trying to remain a close-knit family as the author's wife passes away.
I loved reading about the author's wife and children, especially his love for his wife. I would have loved to learn a bit more about his other family members as well. The author's mother is mentioned several times but I would have liked to learn more about his siblings.
All the stories related to the zoo were pretty amazing. Multiple animal escapes, staff spats, and animal personalities. There was a great deal going on. And I loved it all! At times when the author was talking about the animal enclosers I had a hard time picturing exactly what he meant. I don't know if it was just me or if it's hard for a zoo outsider to understand these things. It was very rewarding to see the zoo's makeover from start to finish and see the staff form and come together to get the zoo ready for inspection.
This was a very original true story and I would like to learn more about this family and their zoo since this book was completed!
4/5 Stars
Review copy provided by publisher

Do you like to go to the zoo? What's your favorite animal?
In the book the author talks about a documentary tv that's being filmed about the zoo called Ben's Zoo for the BBC I believe. I tried to find some more information on it or possibly a dvd but turned up nothing. I did find this video though, which is pretty cool!
Posted by Alea at 6:16 PM