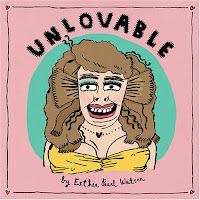 Unlovable by Esther Pearl Watson
Description from Amazon.com:
A soon-to-be teen classic: Esther Pearl Watson loosely based this graphic novel on a teenager's diary from the 1980s found in a gas-station bathroom. Unlovable is a first-person account of Tammy Pierce's sophomore year in 1985. The comic has a devoted following because it is serialized Bust magazine: this is the first-ever collection and Watson has created over 100 new pages for the book, which details Tammy's the sometimes ordinary, sometimes humiliating, often poignant and frequently hilarious exploits. Her hopes, dreams, agonies and defeats are brought to vivid, comedic life by Watson's lovingly grotesque drawings, filled with all the eighties essentials - too much mascara, leg warmers with heels and huge hair - as well as timeless teen concerns like acne, dandruff, and the opposite sex (or same sex, in some cases) It will have special resonance for women and young adults. Unlovable will be handsomely packaged in a unique hardcover format with sparkly blue glitter.
Released on December 15th 2008.
Ok I am seriously freaking out right now! I read a snippet about this collection coming out about a year ago but you know these sort of things always end up getting delayed for some reason or another. A lot of the comics were published originally in zine format but were mostly out of print.
And just by chance I looked up the author on amazon and what did I find! The book was coming out like RIGHT NOW! I'm going to pre-order this sucker this very minute! I've read her comics in Bust (actually the reason I subscribed) and got to listen to the author and her husband, who are both hilarious give a presentation a few years ago! GAH! So excited! They also wrote a great book about zines which I adore! Check that one out here!
What are you waiting on to be released?
"Waiting On" Wednesday is hosted by Jill at Breaking the Spine!
Posted by Alea at 6:00 AM