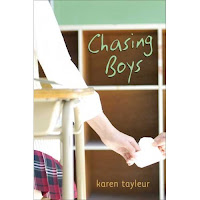 Chasing Boys by Karen Tayleur
Amazon.com Product Description:
An insightful coming-of-age novel for girls with no interest in being “Pretty in Pink”.
El Marini just isn’t fitting into the new life she’s been forced to create without her dad. Her mom and sister have accepted his absence and moved on, but El is convinced things will get back to normal if she just keeps her feelings of loss to herself and waits it out.
Life at her new public school would have been unbearable if weren’t for Eric Callahan. As her crush grows to epic proportions, she’ll do anything to be more like the popular girls he notices, even buying the first pink top she’s ever owned. But then she meets Dylan, a quiet artistic-type who is both unnerving and annoying as he shines a light on El’s misguided attempts to attract Eric. El’s need for acceptance will hit home with teens as she finally sees that chasing boys has distracted her from making peace with the past and finding herself.
Released on January 6th 2009.
Did someone say artistic-type? Squeeeeeeeeeee. I just know this is going to be good. Cute, artistic boy challenging the main character's actions? Awhile back this type of storyline was brought up again and again on Reviewer X's blog in the comment's section, check it out! In college my art classes were filled with cute artistic-type boys. Swoon.
What are you waiting on to be released?
"Waiting On" Wednesday is hosted by Jill at Breaking the Spine!
Posted by Alea at 6:00 AM