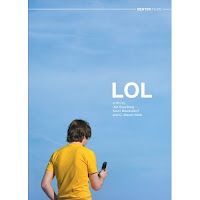 From acclaimed auteur Joe Swanberg (Hannah Takes the Stairs, Kissing on the Mouth), the SXSW Film Festival favorite LOL is a raw, witty and painfully intimate look at modern sexuality and the technology that either helps us click or turns us off.

Struggling to balance their online obsessions with the demands of real life, Alex (Kevin Bewersdorf), Chris (C. Mason Wells) and Tim (Swanberg) are, like many young men, unable to decipher the mixed messages that everyday tools of communication offer. Does e-mail help them connect, or are they alienating their chances for love by viewing women through the dimensions of a computer screen and the lens of a cameraphone?

Filmed with documentary-like realism and a nonprofessional cast, and featuring a brilliantly eclectic soundtrack by Bewersdorf, LOL's defiantly un-Hollywood approach pulls no punches in its up-to-the-second relevance and honesty about the new male paradigm.

I've seen a handful of movies from this group of people, but only one by this actual director. I think I preferred this one a bit to his other movie, Hannah Takes the Stairs.

It definitely brings to light an interesting and important topic, being too connected and plugged in via the phones and computers (which I suspect might be me right now). And this movie is a good example of maybe what not to do! It depicts strained relationships and ones left unexplored because of technology as a distraction and interference.

My favorite parts of the movie were the montages of mouth sounds that are cut together to make music (by one of the characters.) I couldn't get enough of it! I also liked the montages of camera phone pictures played to voice mails. Beautiful stuff.

And a warning, there is some nudity in this movie so if you shouldn't be watching it please don't!