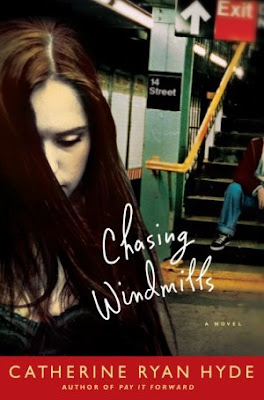 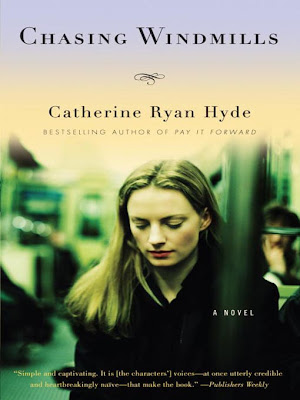 Catherine Ryan Hyde, bestselling author of Pay It Forward, returns with a provocative tour de force on first love—a modern-day rendering of West Side Story born on a New York City subway car and nurtured under the windmills of the Mojave Desert. The subway doors open and close, and in one moment Sebastian’s and Maria’s lives are changed forever. Rendered in Catherine Ryan Hyde’s stirring and evocative prose,CHASING WINDMILLS is a poignant love story that will leave you yearning for a subway ride that is a fraction as enchanting.Letting go becomes the purest expression of love in this extraordinary novel by the bestselling author of Pay It Forward, Catherine Ryan Hyde. Both Sebastian and Maria live in a world ruled by fear. Sebastian, a lonely seventeen-year-old, is suffocating under his dominant father’s control. In the ten years since his mother passed away, his father has kept him “safe” by barely allowing him out of their apartment. Sebastian’s secret late-night subway rides are rare acts of rebellion. another is a concealed friendship with his neighbor Delilah, who encourages him to question his father’s version of reality. Soon it becomes unclear whether even his mother’s death was a lie. Maria, a young mother of two, is trying to keep peace at home despite her boyfriend’s abuse. When she loses her job, she avoids telling him by riding the subways during her usual late-night shift. She knows her sister, Stella, is right: She needs to “live in the truth” and let the chips fall where they may. But she still hasn’t been able to bring herself to do it. And soon he will expect her paycheck to arrive. When Sebastian and Maria wind up on the same train, their eyes meet across the subway car, and these two strangers find a connection that neither can explain or ignore. Together they dream of a new future, agreeing to run away and find Sebastian’s grandmother in the Mojave Desert. But Maria doesn’t know Sebastian is only seventeen. And Sebastian doesn’t know Maria has children until the moment they leave. Ultimately, Maria brings one child, her daughter. Can she really leave her little boy behind? And, if not, what will it cost her to face her furious jilted abuser? In this tremendously moving novel, Catherine Ryan Hyde shows us how two people trapped by life’s circumstances can break free and find a place in the world where love is genuine and selfless.

I haven't read this book but I always thought that the Hardcover (which is a lookalike) made the main character look like she was in a fairytale, she just doesn't really look like a real person with the high contrast photography, she also looks kind of like a zombie with that pale skin. Whereas, the paperback version of her, which is completely different, looks like a much more normal 17 year old.