This Week In Books Or Surprises In The Mail! 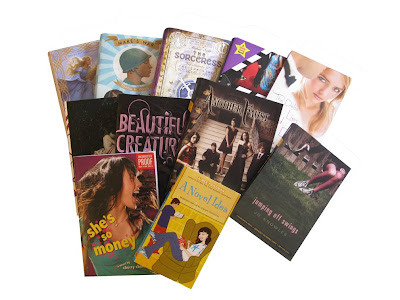 These were both surprises and look at the artwork on the cover of Mare's War, it's beautiful! I think I've seen one of the artist's pieces before, her name is Jody Hewgill, see more here.

The Sorceress by Michael Scott

Another surprise for review!

First two are for review, and seriously Kami Garcia and Margaret Stohl have the most beautiful author photos, I just love them! And Another Faust came for an upcoming Traveling to Teens tour in August.

First two are also surprises for review (seriously I love these surprises). Who's read the A Likely Story series, I've seen them around but haven't read them. Do you like them? And Jumping Off Swings is also for another upcoming Traveling to Teens tour also in August.

These both came from bookmooch!


You won't be seeing a This Week In Books from me next weekend because I'll be away for BEA. But it will resume the following weekend! :) I do have posts scheduled throughout next week until my return. And if I can swing it I might pop on to do a post from BEA, if not I'll do probably a few when I return! So if you email me after tomorrow morning you might not hear a reply until the beginning or middle of the following week. Hope everyone has a nice week!
Posted by Alea at 2:00 PM