All Unquiet Things by Anna Jarzab 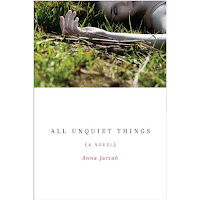 Carly: She was sweet. Smart. Self-destructive. She knew the secrets of Brighton Day School’s most privileged students. Secrets that got her killed.

Neily: Dumped by Carly for a notorious bad boy, Neily didn’t answer the phone call she made before she died. If he had, maybe he could have helped her. Now he can’t get the image of her lifeless body out of his mind.

Audrey: She’s the reason Carly got tangled up with Brighton’s fast crowd in the first place, and now she regrets it—especially since she’s convinced the police have put the wrong person in jail. Audrey thinks the murderer is someone at Brighton, and she wants Neily to help her find out who it is.

As reluctant allies Neily and Audrey dig into their shared past with Carly, her involvement with Brighton’s dark goings-on comes to light. But figuring out how Carly and her killer fit into the twisted drama will force Audrey and Neily to face hard truths about themselves and the girl they couldn’t save.

Besides the mystery aspect the book spoke of lost love, friendship, and family troubles. It reminded me a bit of one of my favorite television shows, Veronica Mars. I love the idea of teens solving a mystery (and not a childish mystery), their tactics are obviously going to be different than an adults, or the police. It's just more fun.

I loved that the book was told both from Neily and Audrey's perspectives. Though sometimes I had to remind myself who the narrator was because they were often in each others scenes. It was also refreshing to come across two main characters that weren't involved romantically but worked together as a team, as friends, they helped each other find closure over the death of their love (Neily) and best friend/cousin (Audrey).

There were only a few suspects in the story but when it came down to it, I totally didn't see it coming when the actual murderer was revealed. The entire book was a complex web of lies and truths and I just had a great time reading the book. I also think it would lend itself nicely to a movie format.

All Unquiet Things will be released on January 12th 2010
Genre: Young Adult, Mystery
4.5/5 Stars
ARC provided by Amazon Vine
Posted by Alea at 6:00 AM