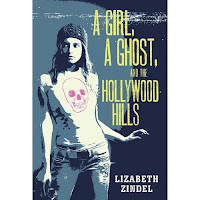 A Girl, A Ghost, and the Hollywood Hills by Lizabeth Zindel

When Holly's mother dies unexpectedly, she thinks things can't get much worse. But then her dad starts dating again. And his new girlfriend is Holly's aunt and her mom's sister! Aunt Claudia is known in Hollywood as the Queen of B Movies. Horror films, zombie flicks, she's made them all. Holly never liked her aunt, but now she positively can't stand her. Especially once the ghost of her mother appears and tells Holly that Claudia was to blame for her death.

Inspired by Hamlet, this funny novel about the danger of family secrets is a modern comic take on a classic Shakespearean tragedy.

I'm so glad this says "comic take" in the summary cause Hamlet = not very light! I think this could be a lot of fun. Could totally see Holly trying to take down her aunt, I love that her aunt is the Queen of B Movies! I'm sure we'll get some great movie descriptions in the book!
What can't you wait for to be released?
"Waiting On" Wednesday is hosted by Jill at Breaking the Spine!
Posted by Alea at 6:00 AM