For more crafty goodness be sure to stop over at WIP Wednesday! 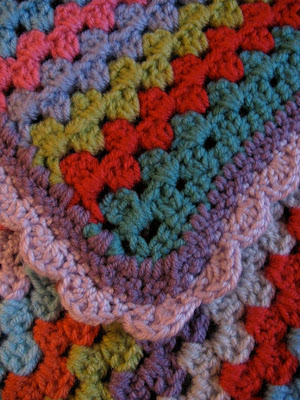 So last week I finished my first afghan (or since I don't like that word it sounds too stuffy, blanket!!!) The only thing I really had left to do was the edging which you can see here. And in case anyone is interested in making the Granny Stripe Blanket for themselves you can find the pattern here at Attic24.

I also checked out the book, Crochet Me from the library and made this scarf! It works up really quickly though turned out rather short. If I were to make this again I'd make it like twice as long!


This is the yarn I used (already owned):
Vanna’s Choice:
Mustard 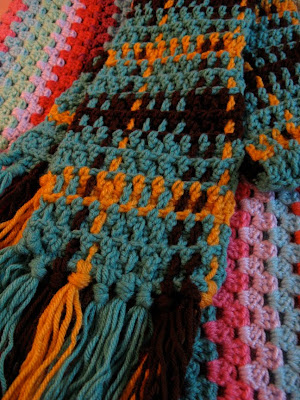 This weekend I started another blanket, this time a Ripple blanket, surprise this pattern is also from Attic24! I haven't forgotten about my Summer Garden Granny Square blanket, just still on a break from all the end weaving etc! For this Ripple blanket I'm using mostly the same colors as the Granny Stripe (the extra yarn actually) but I'm doing it in ROYGBIV order instead of just random. Here is what I'm using: 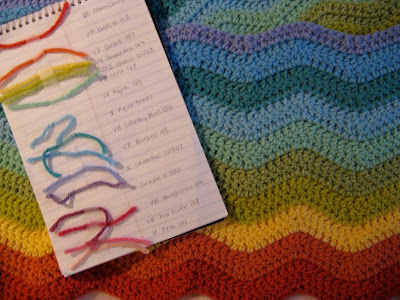 Last week Crochet Today's Special Must-Have Gifts issue came out, I had thought it was coming out later in the month but Tami let me know she had seen it in stores so I went out and found it. Interestingly none of the craft stores had it but Borders did! The magazine had this fun scarf pattern that was made with crochet thread and since I've never used it I jumped at the chance so I bought that specific thread which since it's made from Bamboo it's really really soft and some thicker stuff to try a coaster pattern also in the magazine. The issue is comprised of patterns from past issues that I guess are considered gift-able and luckily for me since I'm a new subscriber only one of the patterns I already had! Thought they probably should have checked the patterns over because the crochet thread for the previously mentioned coasters doesn't seem to be available in this country anymore! I also got a crochet pattern calendar that is smartly placed right by the check out line that I've eyed the last few times I was at Joann's and some Tweed Stripes yarn from Lion Brand to maybe make a scarf or something out of, haven't seen this line before! 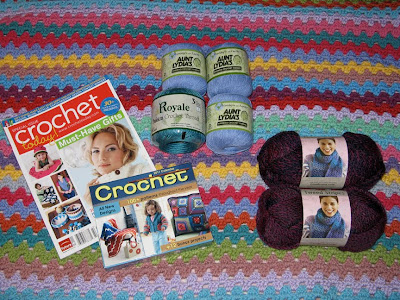 And lastly some of my latest craft books, some of these I got recently at Half Price Books and forgot to share and the rest are part of a big Amazon order I recently placed that came the end of last week and yesterday! 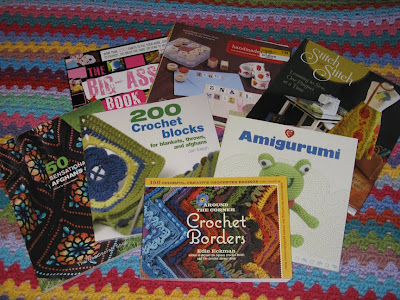 Happy Crafting!
Posted by Alea at 6:00 AM