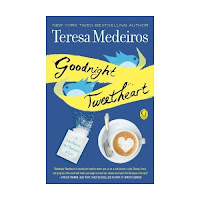 Abigail Donovan has a lot of stuff she should be doing. Namely writing her next novel. A bestselling author who is still recovering from a near Pulitzer Prize win and the heady success that follows Oprah’s stamp of approval, she is stuck at Chapter Five and losing confidence daily. But when her publicist signs her up for a Twitter account, she’s intrigued. What’s all the fuss?

Taken under the wing of one of her Twitter followers, “MarkBaynard"—a quick witted, quick-typing professor on sabbatical—Abby finds it easy to put words out into the world 140 characters at a time. And once she gets a handle on tweets, retweets, direct messages, hashtags, and trends, she starts to feel unblocked in writing and in life. After all, why should she be spending hours in her apartment staring at her TweetDeck and fretting about her stalled career when Mark is out there traveling the world and living?

Told almost entirely in tweets and DMs, Goodnight Tweetheart is a truly modern take on a classic tale of love and loss—a Griffin and Sabine for the Twitter generation.

Being a fan of twitter and romance and novels told in the epistolary format I just had to give this book a read! While it did succeed in entertaining me and keeping me coming back for more (which isn't happening a lot lately to be honest) I feel like I just needed more in a few instances.

Using something like Twitter I think this book could have benefited from a bit more design and formatting a la the book Tweet Heart. Having the tweets treated pretty much like the rest of the text in the book had me confused a bit at the beginning as far as if it was an actual tweet or a direct message. Also to help shape this conversation between Abby and Mark I would have loved to have seen some of their just regular tweets not directed at each other.

Their tweets were pretty fun, though sometimes very full of current pop culture references which might not stand the test of time or fly right past some people's heads. I loved the idea at the heart of the book, Abby struggling to write her second book after a huge amount of success with the first and some wonderful stranger there encouraging her to do so.

From the summary I knew they had to be some kind of twist coming about Mark and who he really was. So I definitely kept reading to find out what it was. To be honest I was hoping for something a little different, trying to be vague here to not give much away. Also I would have loved a bit more at the ending, it ended pretty quickly for me. But overall a fun book!

Goodnight Tweetheart was released on December 14th 2010
Genre: Contemporary Romance
3.5/5 Stars
Review copy provided by the publisher
Posted by Alea at 9:22 AM