Of All The Stupid Things by Alexandra Diaz 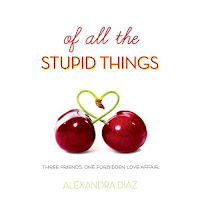 When a rumor starts circulating that Tara's boyfriend Brent has been sleeping with one of the guy cheerleaders, the innuendo doesn't just hurt Tara. It marks the beginning of the end for an inseparable trio of friends. Tara's training for a marathon, but also running from her fear of abandonment after being deserted by her father. Whitney Blaire seems to have everything, but an empty mansion and absentee parents leave this beauty to look for meaning in all the wrong places. And Pinkie has a compulsive need to mother everyone to make up for the mom she's never stopped missing. This friendship that promised to last forever is starting to break under the pressure of the girls' differences.

And then new-girl Riley arrives in school with her long black hair, athletic body, and her blasé attitude, and suddenly Tara starts to feel things she's never felt before for a girl--and to reassess her feelings about Brent and what he may/may not have done. Is Tara gay--or does she just love Riley? And can her deepest friendships survive when all of the rules have changed?

Some of my favorite books involve alternating perspectives and a group of best friends so Off All The Stupid Things at first glance would be right up my alley. And while I did enjoy reading it, it wasn't focused enough for me to love it.

I enjoyed all the characters and their basic story lines and how different they were from each other. They were almost so different it was hard to understand why they were friends, but that does get somewhat explained in the book. I love how quickly they came to each others defense and particularly Whitney Blaire who was not afraid to whisper or shout some choice words or even pull some hair when she thought her friends were being threatened.

Initially I thought the focus was to be on Tara with Whitney Blaire & Pinkie sort of acting as secondary stories but they all sort of took turns taking the spotlight. In a book this short that left a lot of unfinished story lines that were over much to quickly. I think it would have made more sense to decrease these very fast moving plot points to make more room for more resolution. The book to me ended much to quickly and on a sort of strange note, I hope there is a sequel planned of some sort because I hope for more resolution that I got.

Overall a story of friendship that could have done with a few less story lines and more focus.

Of All the Stupid Things was released on December 22nd
Genre: Young Adult
3/5 Stars
ARC provided by publisher
Posted by Alea at 9:00 AM