Flash Your Stash (of Yarn!)

Tami over at Tami's Amis and Other Crochet is hosting a Flash Your Stash today of yarn. And of course I had to participate. I wanted to add a bit of commentary as well! Click the images to enlarge!

A. This is the yarn I'm using to make the Summer Garden Granny Square blanket from Attic24. It's yarn I already had from my stash, in attempts to try and use it up.

B. This specific yarn is the first I ever bought. I think I was either still in college or had just graduated. I bought it and some metal knitting needles at Walmart wanting to teach myself to knit. It didn't happen and I just threw them in a box for a few years.

C. This is the yarn for the Granny Stripe Blanket from Attic24. I purchased all this yarn to make the blanket. I'm almost done with my first skein of each of the 16 colors and just purchased a whole new set of 16 which will hopefully take me through the rest of the blanket, fingers crossed!

D. This is a bunch of random yarn I bought when I started doing Amigurumi. I bought a bunch of colors I thought I would need so I wouldn't have to go buy something new every time I wanted to start one. Some I've used some I haven't. I really regret buying that electric orange, I guess I thought I would be making some carrots?

E. I bought this yarn to make the cable knit scarf I was working on back in the spring and ended up deciding I didn't want to continue with this specific scarf so I've been using the yarn for whatever now including the first failed beret!

F. This is the yarn I bought and used in my first ever knitting class. Yay!

G. My newest purchases from earlier in the week. Some of it is project specific and some isn't. 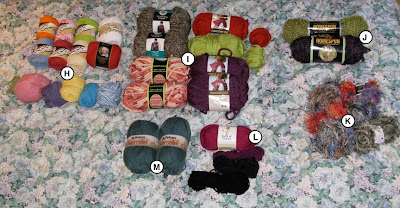 H. Here is some cotton I bought when I was learning to crochet, not sure what I had in mind but I used it on a lot of swatches and my first ever Amigurumi, a bunny!

I. After my first Knitting class apparently I decided I would be making a lot of scarves so this is what I bought. Since then I think I've used two skeins to make two hats.

J. The green I purchased with my sister to make her a scarf, still in progress. The purple would be for another of the same.

K. My aunt gave me this last month, I think it was from a friend of hers. I'm interested to try working with this, probably would be good for a scarf yes?

L. This is the yarn for the berets I made, I have one skein left and some leftovers from those and the black purse I made.

M. I bought this to knit some mittens or half gloves or something, still haven't done it!

I think it's fun to see how people's stashes change and grow so maybe this will be a several times a year thing? I'm hoping to now go on a yarn fast and see how much of this I can use up!
Posted by Alea at 9:00 AM