I may not have read as many books this year as I did the last, yet 7 books rated very high in my book and received 5 stars during 2010! Here they are in chronological order! I believe all but 1(?) the Crochet book by Klutz were released in 2010! Click the titles of each to read my review.

Nine Rules to Break When Romancing a Rake by Sarah MacLean
5 stars given on March 22nd of 2010
Genre: Historical Romance

Get Lucky by Katherine Center
5 stars given on April 7th 2010
Genre: Contemporary Fiction 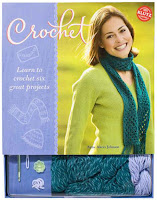 All I Ever Wanted by Kristan Higgins
5 stars given on July 26th 2010
Genre: Contemporary Romance/Chick Lit